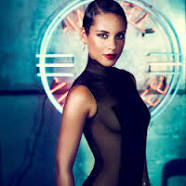 In this weeks news ... Alicia Keys is the new Creative Director for Blackberry. You know that already. But maybe you don't know just how much work goes into creating Alicia Keys. The people, places and things that inspire her and just how she goes about putting it all together to turn out something truly amazing for her fans To that end, she's starring in a short two-part docu-series called "Keep Moving," which details the aforementioned as well as how she's attacking her Set The World on Fire tour. Also, she discusses her plans for incorporating you -- yes you, reading this -- into her stage show. You can upload photos of yourself to blackberry.com/keepmoving and she'll be performing a special song each night wherein the photos are incorporated into a unique and exclusive music video. You can check out what one of the videos looks like here. Pretty awesome.(boombox)

Chinua Achebe, the Nigerian writer seen by millions as the father of African literature, has died at the age of 82. Achebe won the Commonwealth poetry prize for his collection Christmas in Biafra. He was a finalist for the 1987 Booker prize for his novel Anthills of the Savannah, and in 2007 won the Man Booker international prize. Simon Winder, publishing director at Penguin, called him an "utterly remarkable man", adding: “Chinua Achebe is the greatest of African writers and we are all desolate to hear of his death," he said. His family requested privacy, and paid tribute to "one of the great literary voices of all time. He was also a beloved husband, father, uncle and grandfather, whose wisdom and courage are an inspiration to all who knew him." His first novel Things Fall Apart, was published in 1958 and tells the story of the Igbo warrior Okonkwo. "The white man is very clever. He came quietly and peaceably with his religion. We were amused at his foolishness and allowed him to stay. Now he has won our brothers and our clan can no longer act like one," says Okonkwo's friend, Obierika, in the novel. The poet Jackie Kay hailed Achebe as "the grandfather of African fiction" who "lit up a path for many others", adding that she had read Things Fall Apart "countless times”. She added: "It is a book that keeps changing with the times, as he did." (contactnews) On with this weeks show...

Gweneth Paltrow/Babyface - Just My Imagination
Maze - We Are One

DETROIT — Bobby Smith, longtime lead singer of The Spinners (Detroit Spinners, UK), died Saturday in Orlando of complications from pneumonia and the flu, his family said. He was 76. Smith had been diagnosed with lung cancer in November. The funeral will take place Monday in Detroit, where Smith will be interred, said the group's Jessie Peck. Smith's final performance came in mid-February during the Soul Train Cruise, said Peck. Smith, who had missed several gigs since his cancer diagnosis, was present on the cruise but not expected to perform during The Spinners' set. Then the group began to perform its 1974 hit Then Came You. "Like something out of a movie, Bobby shoots right out onstage and, showman that he is, grabs a mike and sings right on cue," Peck recounted. "The audience went bananas." Smith joined the group in 1956 when it was known as the Domingoes. Frustrated with frequent misspellings, group members soon sought a new name, and it was the suggestion of Smith, a lifelong car buff, that won the day: "Spinners" was a nickname for high-end hubcaps. Smith, whose first name was periodically spelled Bobbie, was lead voice on the group's first hit, 1961's That's What Girls Are Made For, produced with Harvey Fuqua, a link that led the group to Motown Records two years later. Smith and the Spinners enjoyed only minimal success during their Motown tenure, but broke big after signing with Atlantic Records in 1971 at the suggestion of Aretha Franklin. A stream of hits followed with Smith's prominent vocals: I'll Be Around, Could It Be I'm Falling in Love, One of a Kind (Love Affair), Then Came You, Games People Play. As the group maintained a busy touring and recording schedule, Smith left Detroit for New Jersey in the 1980s, later settling in Florida. (usa today)