In the news this week...Husband and wife duo, Kindred the Family Soul, released their new album A Couple Friends this past June. Now, the inspirational singers have released a music video for the albums title track, and united with iconic singer-songwriter Valerie Simpson for the visual. Often compared to Ashford & Simpson it’s fitting that Fatin and Aja join forces with Valerie for the video to the uplifting track. “Aja’s verse is a tearjerker to me and so eloquently expressed,” shares Fatin. “The song is special to us and to have Ms Valerie Simpson on it is the cherry on top.” Celebrate real love, commitment and romance with the new video below: (ThisIs&B) 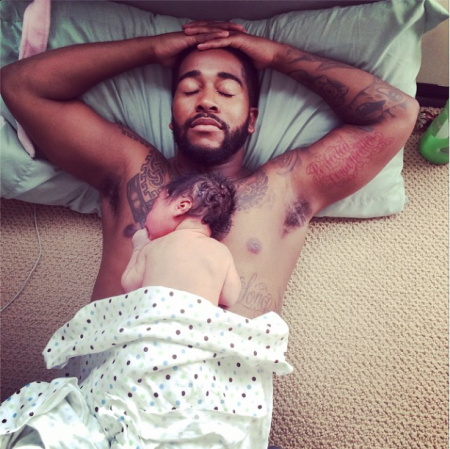 It seems as if singer Omarion and his girlfriend Apryl Jones have finally dropped their baby load! Delivering the 7 pound 4 oz baby only yesterday, the couple is already in love with their new addition to the family. Both taking to their respective Instagram accounts yesterday, they revealed to the world small details of the birth of their son. Naming him Megaa Omari Grandberry, the “MIA” singer is in complete awe with what he calls his “legacy”. Under his photo, Omarion praised his small family. (ThisIsR&B)

The American record company executive and producer, Henry Stone, has died. Henry was 93. He passed away on Thursday the 7th of August at the Mercy Hospital in Miami of natural causes. Henry’s active musical career spanned a period of over half a century. He was, probably best remembered for being the co-owner and president of TK Records.
Henry’s was playing trumpet in his early childhood, later serving in the U.S. Forces, performing in inter-racial groups, and leaving the army in 1947. He relocated to Los Angeles, working for Jewel Records, Modern Records, before relocating again in Miami, Florida. In Miami, Henry set up a distribution company called Seminole. He worked for, or distributed sides for many artists, including Ray Charles, Earl Hooker, The Charms and James Brown. Henry later worked with several Miami based artists, including Betty Wright, Timmy Thomas, KC and the Sunshine Band, George McCrae, Beginning of the End, Latimore, Gwen McCrae, Peter Brown and Bobby Caldwell. His TK Records imprint ceased operating in 1981. Henry later became involved with Hot Productions, later setting up his own label, The Legendary Henry Stone Presents... In 2004, Henry was awarded the first ever Pioneer Award for the Dance Music Hall of Fame. Henry is survived by his wife Inez, and his children Donna, Joseph, Lynda, Crystal, Sheri, Kim and David and 14 grandchildren. (soulwalking.co.uk)

Melissa Young - Rock With Me
Nina Simone - I Wish I Knew How It..
..Would Feel To Be Free (Studio Rio mix)
Euge Groove - Just My Imagination
Sharon Jones/Dap Kings  - We Get Along
Keith Sweat - Think (Mama Used To Tell Me)
Gap Band - Keep Holding On
Allen Stone - Is This Love
Luther Vandross/Busta Rhythms - Lovely Day
Jill Scott - Family Reunion
Joe - Future Teller
Angie Stone - No More Rain in This Cloud
Ledisi - Stay Together

The Stylistics were formed in 1968 from the fragments of two Philadelphia groups, the Monarchs and the Percussions, by Russell Thompkins Jnr. (Born 21 March 1951, Philadelphia, Pennsylvania, USA), Airrion Love (Born 8 August 1949, Philadelphia, Pennsylvania, USA), James Smith (Born 16 June 1950, New York City, USA), Herbie Murrell (Born 27 April 1949, Lane, South Carolina, USA) and James Dunn (Born 4 February 1950, Philadelphia, Pennsylvania, USA). The quintet's debut single, "You're A Big Girl Now" was initially issued on a local independent, but became a national hit following its acquisition by the Avco label. The Stylistics were then signed to this outlet directly and teamed with producer/composer Thom Bell. This skilful musician had already worked successfully with the Delfonics and his sculpted, sweet-soul arrangements proved ideal for his new charges. In partnership with lyricist Linda Creed, Bell fashioned a series of immaculate singles, including "You Are Everything" (1971), "Betcha By Golly Wow" and "I'm Stone In Love With You' (both 1972), where Simpkins" aching voice soared against the group's sumptuous harmonies and a cool, yet inventive, accompaniment.

The style reached its apogee in 1974 with "You Make Me Feel Brand New', a number 2 single in both the USA and UK. This release marked the end of Bell's collaboration with the group, who were now pushed towards the easy listening market. With arranger Van McCoy turning sweet into saccharine, the material grew increasingly bland, while Thompkins" falsetto, once heartfelt, now seemed contrived. Although their American fortune waned, the Stylistics continued to enjoy success in Britain with "Sing Baby Sing", "Can't Give You Anything (But My Love)" (both 1975) and "16 Bars" (1976), while a compilation album that same year, The Best Of The Stylistics, became one of the UK's bestselling albums. Despite this remarkable popularity, purists labelled the group a parody of its former self. Ill health forced Dunn to retire in 1978, whereupon the remaining quartet left Avco for a brief spell with Mercury Records. Two years later they were signed to the TSOP/Philadelphia International Records stable, which resulted in some crafted recordings reminiscent of their heyday, but problems within the company undermined the group's progress. Subsequent singles for Streetwise took the Stylistics into the lower reaches of the R&B chart, but their halcyon days seemed to be over, even though they released new material in the mid-90s.

Email ThisBlogThis!Share to TwitterShare to FacebookShare to Pinterest
Labels: Stylistics