More departures in the Soul news this week...Richard Street, a member of legendary Motown Records group The Temptations, died early Wednesday morning (Feb. 27) at a hospital in Las Vegas. He was 70. "He was really fighting for his life," his wife Cindy told CNN. "He's a fighter. They're dancing up there in heaven, him and Damon. I'm in disbelief right now." She's referring to Damon Harris, another member of The Temps, who passed away last week. Street officially joined the group in 1971, replacing Paul Williams, for whom he was already singing vocals for from off-stage, while Williams lip-synched. Prior to that, he worked in Motown's quality control department and also sang in other groups like the Distants and the Monitors, which included future members of the Temptations.

"He was part of black history," said his wife. "He was always proud of that. He sang on a lot of those classic songs: 'Papa Was a Rollin' Stone,' 'Hey Girl,' 'Heavenly,' 'Superstar,' 'Masterpiece.'" According to his wife, Street was troubled by back pain and had difficulty breathing last Friday (Feb. 22). Once in the hospital, doctors found a clot in his lung. Though he left the Temptations in the early 90s, Street continued on stage, reportedly performing 45 dates in Europe just last Fall. (Boombox)

Zoe Saldana is playing Nina Simone in an upcoming biopic on the late singer, but she's not letting criticism of her being cast in the role get her down. "I guess what kept me from being hurt by the negative comments was that I'm doing it for my sisters and my brothers," she said in an interview with Hip Hollywood. "And I don't care who tells me I'm not this or I'm not that. I know who I am, and I know what Nina Simone means to me." She went on to explain that even if the film is met with a negative reaction, she'll keep her chin up. "Nina was like that too," she explained. "I did it all out of love. Out of love for Nina. Out of love for my people and who I am. And my pride of being a black woman and a Latina woman and an American woman, and that's my truth." (boombox)

Gladys Knight & The Pips - Neither One Of Us
Curtis Mayfield - Only You Babe
Art Porter - Under Cover [welcome bed]
Gweneth Paltrow & Babyface - Just My Imagination
Ledisi & Jaheim - Stay Together
Sounds Of Blackness - He Took Away All My Pain
Eddie Towns (ET) - Magic In The Air
Black Street - Falling In Love Again
Sunfire - Young, Free & Single
Barbara Mason - On And Off
Candy Brown - Since I Found You
Shirley Brown - After A Night Like This

Hour Two
Chantey Savage: 'Three in a Row'
1  All Of My Love 2  Round & Around  3  Let's Do It Right
Eric Benet - Why You Follow Me
Brian Cuthbertson/Kenny Lattimore - Another Love
Chaka - Everywhere
Dwele Who Knows Your Name?
The Manhattans - Crazy
Eric Benet - Don't Let Go 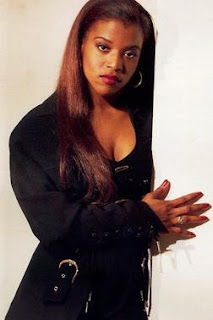 Before Savage signed a recording contract, she parlayed success into gigs as a session musician, singer, and songwriter with artists such as CeCe Peniston and Tanya Blount, she co-wrote Peniston's number one Dance single "We Got a Love Thang". In 1993 she released her first single "If You Believe" from her debut album Here We Go..., her follow-up "Betcha'll Never Find" became a top twenty dance and R&B hit on the Billboard chart. She also released the singles "Don't Let It Go to Your Head" and "Give It to Ya".

In 1995 she teamed up with Aaliyah, En Vogue, BlackGirl, Mary J. Blige, Vanessa Williams, SWV, and others for the single "Freedom" from the movie Panther.

Savage took two years off before she returned in 1996 with "I Will Survive" from her second album I Will Survive (Doin' It My Way). The lead single became a moderate smash in the U.S., where it reached #5 on Billboard's R&B chart, and number 12 in the UK Singles Chart. The single was also certified gold by the RIAA for US single sales of over 500,000 units. In 1997 she, along with Deborah Cox, Heavy D, and Brownstone performed Janet Jackson's #1 single "That's the Way Love Goes" at the Soul Train Music Awards tribute to the popular icon. In 1998 Savage scored another minor hit with "Reminding Me (Of Self)", performed by Common. It was a top 10 hit on Billboard's Hot Rap chart.

In 1999 she released her third album This Time, its first single "Come Around" which peaked at number 62. Savage wrote all the lyrics and played piano and drums. In 2003, she collaborated with spoken word artist Malik Yusef on the song "Auto-Eroticism" on his album The Great Chicago Fire: A Cold Day In Hell. Three years later, she appeared on a remake of the Earth Wind & Fire hit "September" for Full Flava's Music is Our Way of Life album. Also that year, she recorded the theme song for BellaNutri titled "Always Beautiful" as well as an additional track "Shine" which was released on a CD for the company.

In 2012, she collaborated with another spoken word artist, Quill, on his track "Everything Must Change." (wiki)
Posted by Mickey Nold at 08:57