In this weeks news..... R&B superstar Ne-Yo is giving his British fans the chance to join in the fun on his tour bus as he performs across the U.K. later this year 2013. The Monster hitmaker is heading to Britain for a string of gigs, kicking off in Newcastle, England on 3 March 2013. He has teamed up with credit card giant Mastercard to give one lucky winner a behind-the-scenes concert experience, which includes riding on his tour bus and joining him onstage at one of his concerts. In a video to his devotees, he says, "My fans have put me here and I wanna put something back. So I'm gonna give one of you the opportunity to join me onstage at my next tour. "Thanks to Mastercard, you'll get to see what life is like on the road on a Ne-Yo tour. You can check out the tour bus, you can come to the soundcheck and watch the show."

Cissy Houston arrived at her trouble daughter's home in Georgia in 2005 (Whitney) after a call from her son Gary, who feared the star's drug issues were going to killer her. But she was left frightened by the chaotic scene she witnessed after she was let into the home, as strange images had been painted on the doors - and Houston's own face had been cut out of family portraits. Opening up about the incident in her tell-all book, Remembering Whitney, Cissy writes, "I flew to Atlanta and rang the door of the house she shared with her husband, Bobby Brown. "I knew if she was in half as bad a state as that house, she really was in trouble. I'd never seen any house that looked like this one, much less a multi-million dollar home. "I stood in shock. It was dirty and messy, but that wasn't it. The things I saw sent a chill through me. Somebody had spraypainted the walls and door with big glaring eyes and strange faces. Evil eyes, staring out like a threat. Who would do such a thing? It seemed crazy. "In another room there was a big framed photo of Nippy (Houston's nickname), Bobby and their daughter, Kriss - but someone had cut Nippy's head out. It was beyond disturbing, seeing by daughter's face cut out like that. It was frightening." Cissy returned to the home with local cops with a court order to take her daughter into rehab, and she believed her superstar daughter never forgave her for the intervention. She adds, "Because of the court order, Nippy had no choice. She stayed in rehab the whole four weeks... Eventually she stopped being angry at me and later told people I saved her life. But I'm not sure she ever forgave me. I think some part of her couldn't stand that I had made her reveal her worst side to me." The singer was found dead in a bathtub in her Beverly Hills hotel suite on 11 February, 2012. The book hits shelves on Tuesday (29Jan13). 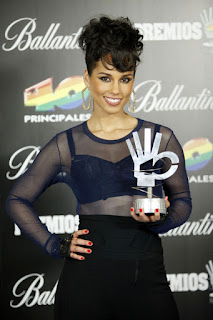 Alicia Keys rang in her 32nd birthday at a music awards show in Spain and left with a special present after accepting a career achievement prize. The Fallin' star, who turned 32 on Friday, marked her special day early on Thursday by attending the 40 Principales Awards in Madrid, Spain, where she was presented with the honor for best American artist/composer of the last decade.  Keys performed at the ceremony and while she was on stage, the crowd serenaded her with a rendition of Happy Birthday. The singer posted a picture of the special moment on her Twitter.com page, with the caption, "Awwww!!!! All these people just sang me Happy Birthday to help bring in my day!!! Such a beautiful memory to have of Madrid!! Thank u thank u Spain!!"  Other guests at the ceremony included French star David Guetta and pop singer Taylor Swift, who performed and picked up the prize for best international artist. She tweeted after the show, "Tonight was my first time at the 40 Principales Awards in Madrid and it was amazing! Thanks to the fans for the International Artist Award."(RNBNews/ContactNews) On to this weeks show...

Clinton “Buddy” Wike, Jeff Sanders, Kermit Quinn and original member Kenny Greene, who passed in 2001 from complications due to AIDS.

Buddy and Kenny met as U. S. Army soldiers while being stationed in North Carolina and formed “Intro” (originally a rap group) along with another soldier named Nelson. During that time the group landed a music deal that Buddy felt unpleasant about. Soon after, Kenny was discharged from the service and moved back to Detroit, while Buddy deployed overseas to the Gulf War.

After Buddy returned to the states he soon reunited with Kenny. Buddy was then introduced to Jeff Sanders who replaced the former member Nelson and the group continued on in search for success. It was until one night the guys went to Club Red Zone located in New York and were discovered by the late Heavy D.

This led them to Eddie F who was the founder of Untouchables Entertainment Group who assisted "Intro" in signing a record deal with Atlantic Records in 1993. Soon after, Intro moved forward into fame and fortune within the music industry.

During Intro’s music career they composed the following songs for Mary J. Blige “Love Without A Limit”, “My Love”, "Reminisce” and “You Don’t Have To Worry” along with having a single on the platinum movie soundtrack “Jason’s Lyric”. Intro also recorded songs with Stevie Wonder, Johnny Gill and Terrance Trent Darby which are featured on the Curtis Mayfield’s tribute album.

Intro recently performed May of 2011 at The Paradise Theater located in Bronx New York at the SNS Productions “90’s Explosion Show” featuring Guy, Christopher Williams, Changing Faces and Horace Brown. Intro also just released their 3rd album and continues to tour around the world. The group will soon be touring U.S. international military installations to perform for the troops and families. Bookings
Posted by Mickey Nold at 08:28

Email ThisBlogThis!Share to TwitterShare to FacebookShare to Pinterest
Labels: Intro