Cecil Morris, PCRL Radio's founder celebrated his 66th. Birthday on Saturday and we all wish him good heath and happiness. Shown here in this photograph getting hundreds of people to sign a birthday card for Nelson Mandela in 1987, that was later presented to him by DJ Chicken George when he visited the UK after his release from Robben Island prison in South Africa.  We are all thinking about Madiba as well this moment in time as he is very ill in hospital in Pretoria.
Nolan Porter featured in a recent Soul film shown at the MAC in Birmingham last week: Keep On Keeping On, Nolan also appeared on Midlands Today TV. While in the UK he recorded two songs for songwriter  Bill Randle at Mickey Nold's Studio 37. He can be found at about 'one minute in', below..

Sad news in the last weeks of June with the losses of singers Mary Love (69) and Bobby Bland (83), Bobby was the more successful but both made wonderful music. Earth, Wind & Fire are about to release the first album in 8 years and Gregory Porter is to release his third album on September the 9th. 2013, his second for Blue Note Records. An excellent new album is to be released by Joe (Thomas) on Tuesday next week along with an album from Nathan Adams entitled: Audio Therapy.  Nile Rodgers' set was an absolute stunner at Glastonbury this week-end, a full 90 minute show, If you missed it do watch it on the BBC iplayer.
That's it for now on to this weeks show...
Playlist for Sunday 30th June 2013

Hour Two
Three-Inna-Row: The (Detroit) Spinners
1 Just To Be With You
2 You Go Your Way
3 Toni My Love 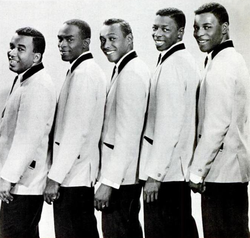 The group is also listed as the Detroit Spinners, and the Motown Spinners (for their 1960s recordings with the Detroit label). These group names were used in the UK to avoid confusion with a British folk group also called The Spinners.

In 1954, a group of friends who grew up together in Ferndale, Michigan, a northern suburb bordering Detroit, came together to make music. For a time, several of the band members resided in Detroit's Herman Gardens public housing projects. Billy Henderson, Henry Fambrough, Pervis Jackson, C. P. Spencer, and James Edwards called themselves The Domingoes. However James Edwards lasted only a few weeks. He was replaced by Bobby Smith, who sang lead on most of the Spinners' early records (and many of their biggest Atlantic hits). C. P. Spencer left the group shortly afterwards, and later went on to be a member of the Voice Masters and The Originals. He was replaced by George Dixon. The group renamed themselves The Spinners in 1961. This name was chosen after looking at popular car hubcaps and noting how they spun around on a car's wheel.
The Spinners is an American soul music vocal group, active for over 50 years, and with a long run of classic Pop and R&B hits especially during the 1970s. The group, originating from Detroit, still tours regularly as of 2013 although Henry Fambrough is the only original member.
(wiki)